Hope for ALS | A Third Option 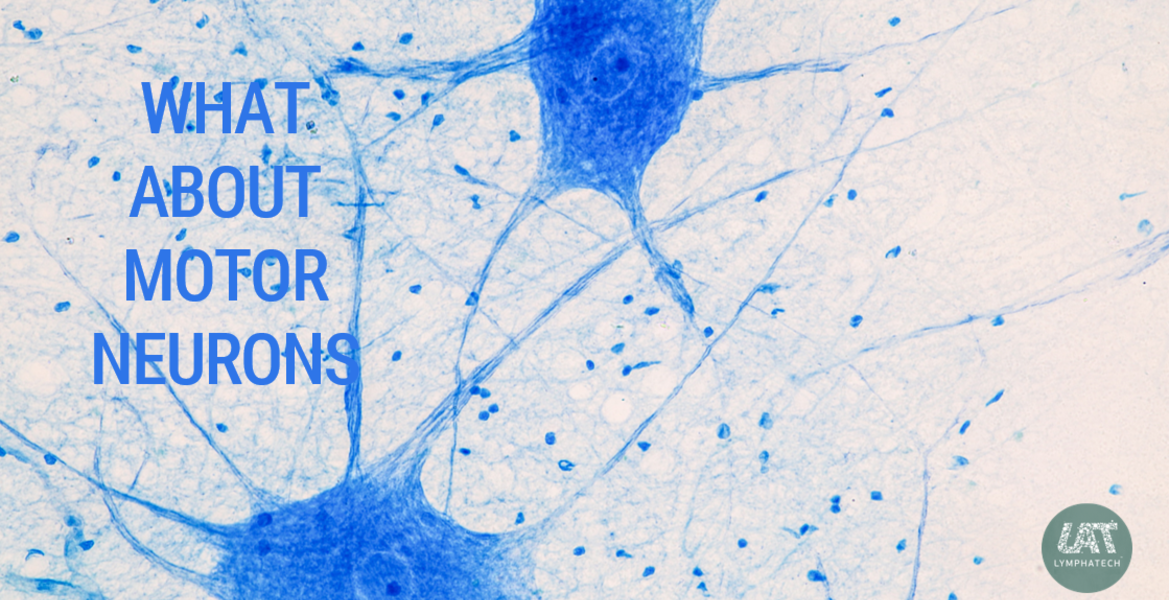 An ALS diagnosis can be devastating.  The patient is often left with a sense of hopelessness as there are really only two well-known options. But is it true?

1) Apply to join an experimental study.  This option does provide a chance of success, but it can also result in the loss of precious time.
2) Work with a local medical provider who will use known protocols that are known to produce extremely limited results.

At the Lymphatech Clinic, we believe there is a third option, but first, let’s talk about the first two.

A Website of Hope or A 50% Chance of Placebo!

Did you know that clinical trials websites are visited by thousands daily looking for hope? These portals host data about ongoing and completed clinical trials for various diseases, including motor neuron disease. 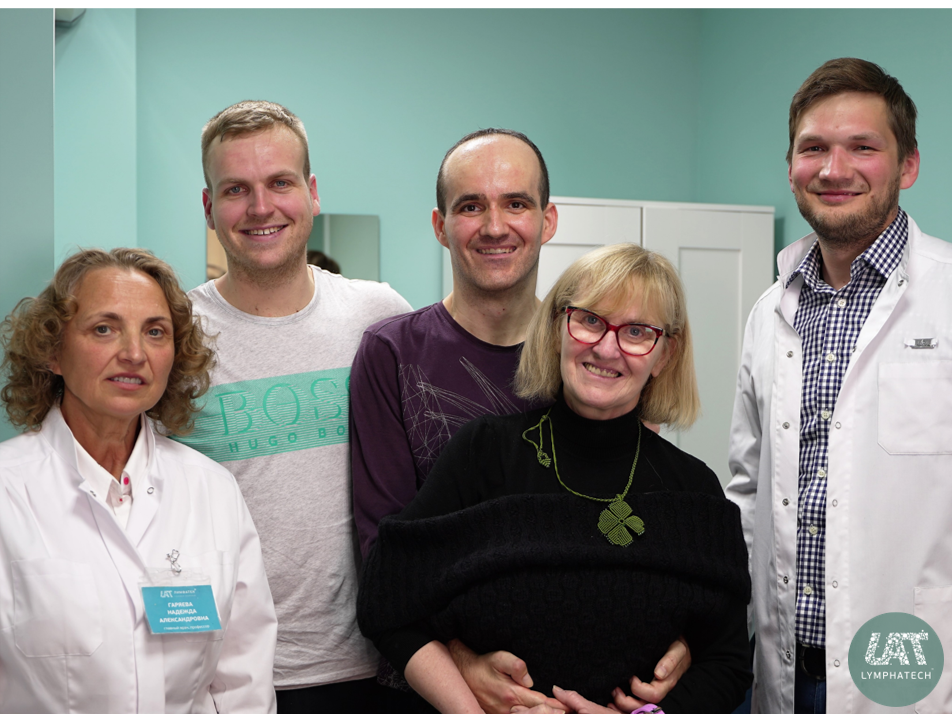 So what is the problem with clinical trials? The problem is that your life is at stake. Clinical trials are placebo-controlled to provide accurate data. But what does that mean for the patient? With a disease like ALS, precious time can be lost for that 50% of patients receiving placebos.

Patients and families struggle to find a magic pill to at least slow down the effect of enemies like ALS (amyotrophic lateral sclerosis). The only one existing on the market is Rilutek which in some early cases of ALS can prolong life by 2 months. Of course, if this is the best option your doctor can provide, you will most certainly go for it. 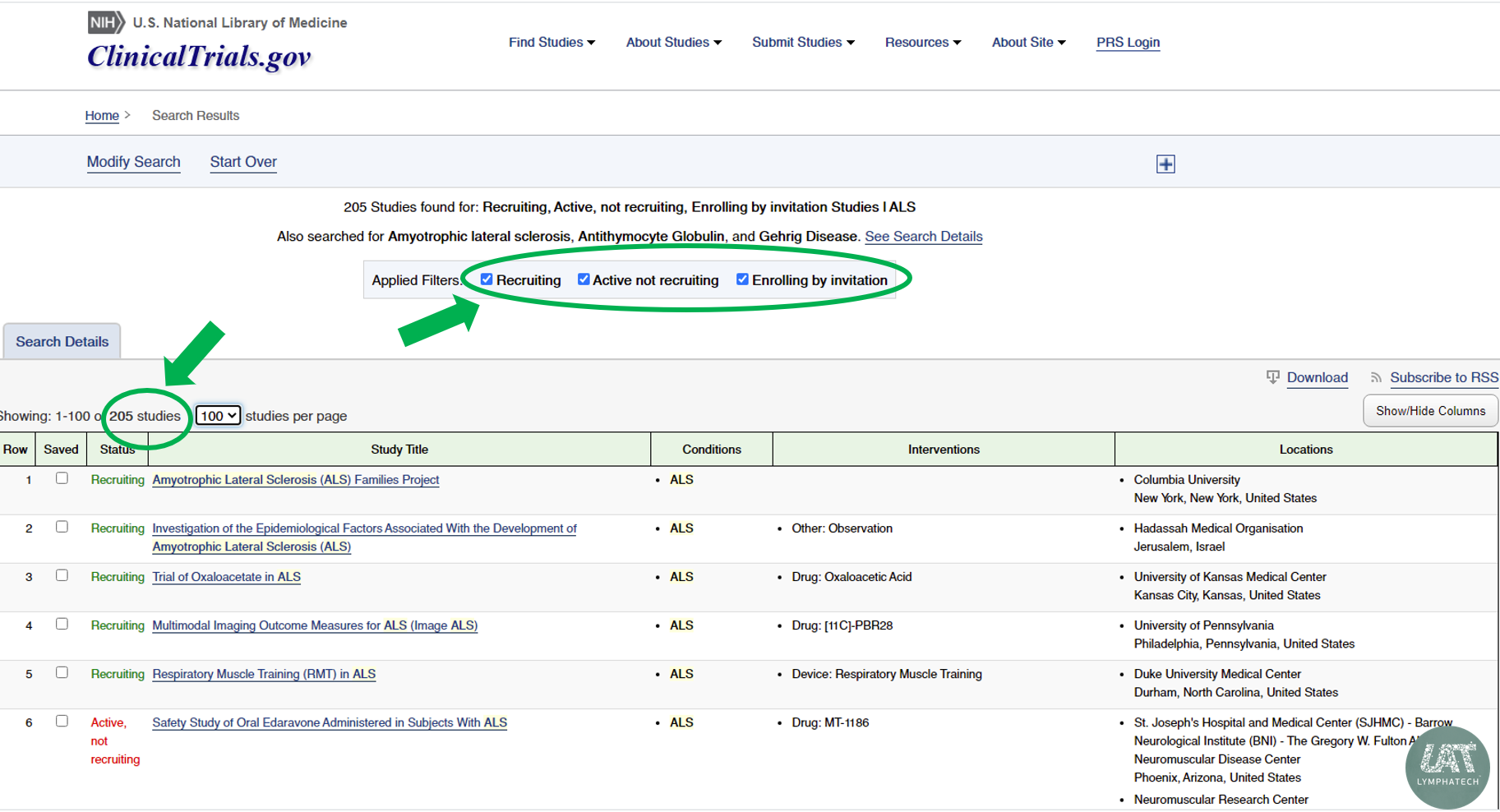 A screenshot from Clinicaltrials.gov with ongoing clinical trials on ALS disease

An American with ALS recently contacted us. He enrolled in the clinical trial of a respectable medical clinic. But is there real hope behind one drug? Take colon cancer for example.  After decades of international research,  a magic bullet in the form of one singular drug has yet to be found. So far effective treatment requires the combination of multiple therapies.

The sooner you take real action, the better your chances of prolonging your life. So what are the alternatives?

According to the Mayo Clinic’s description of ALS, there is no known cause of the disease.   It affects motor neurons and begins with the loss of muscle control.  There is no known cure, and it is fatal. 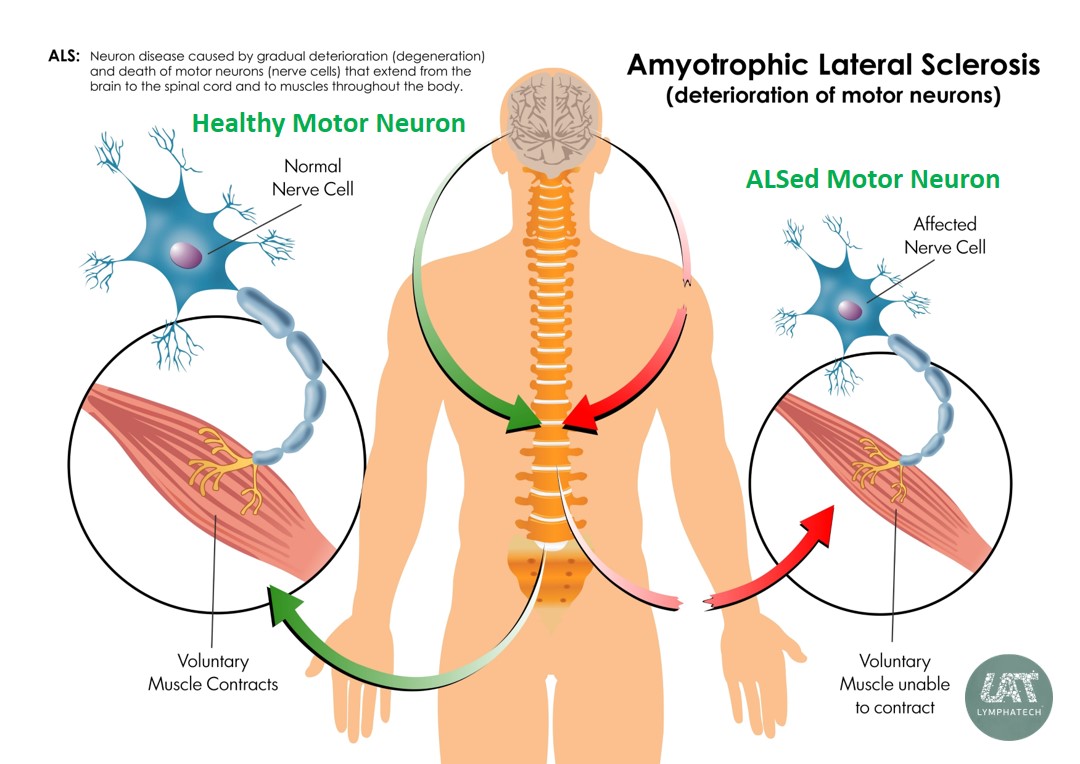 There are clues, however, to possible effective treatments.  Here at Lymphatech, we pursue a completely different approach. Rather than investigating the unknown aspects of ALS or waiting for big pharma to produce a new magic drug, we work to influence the mechanisms that allow the disease to develop.

Most of the damage caused by ALS in the body has its roots in the immune system.

We certainly don’t have a cure for ALS, but we may have found an effective way to contain it. We continue to improve our treatment program, but already we are seeing the fruits of this approach.  Our experience with patients testifies that there is hope. 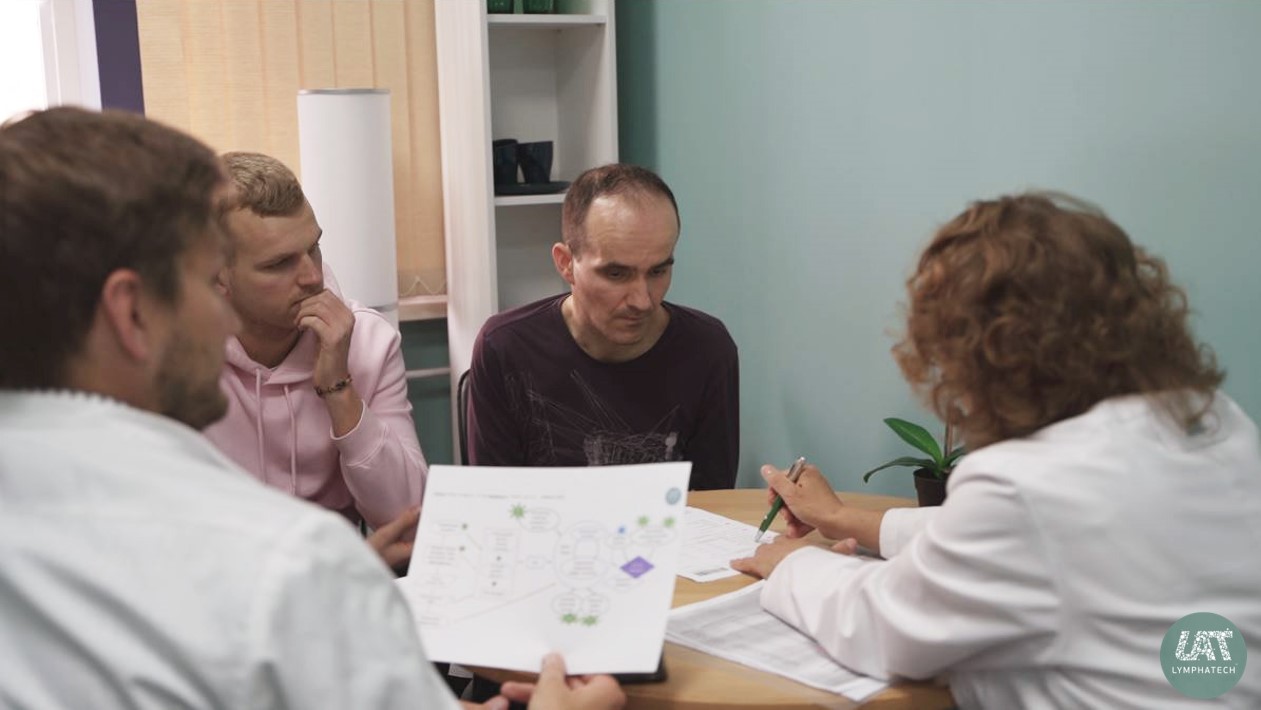 Patrik was a tall and strong 39-year gentleman from Croatia. He was a hotel receptionist at a local hotel and a loving father of two.

In June 2018 during a regular gym session, Patrik felt a strange weakness in his legs. As often is the case, doctors first thought it was caused by back trauma or a herniated disc. Patrik was only correctly diagnosed in May of 2019. By late 2020 he was unable to talk or stand from a seated position. He can still walk with assistance. From 2018 to 2020 he lost 18 kg (40 lbs) and most of it was muscles. 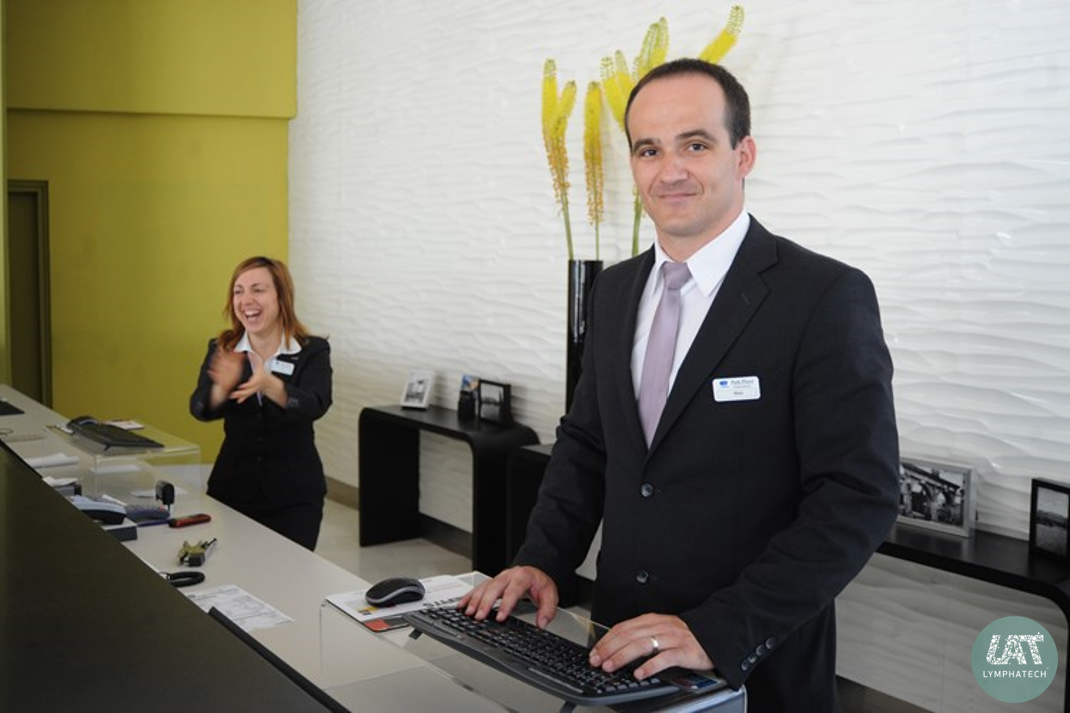 Patrik saw this RussiaToday video about us working on degenerative muscle disorder. When he submitted an inquiry on our website for our remote consultation in December 2020 his weight was 78 kg (172 lbs). He submitted all the documents and we did our preliminary consultation by studying his case, analyzing the accuracy of his diagnosis, and estimating our chances for success.  Patrik came in March 2020 weighing just 72 kg (158 lbs). 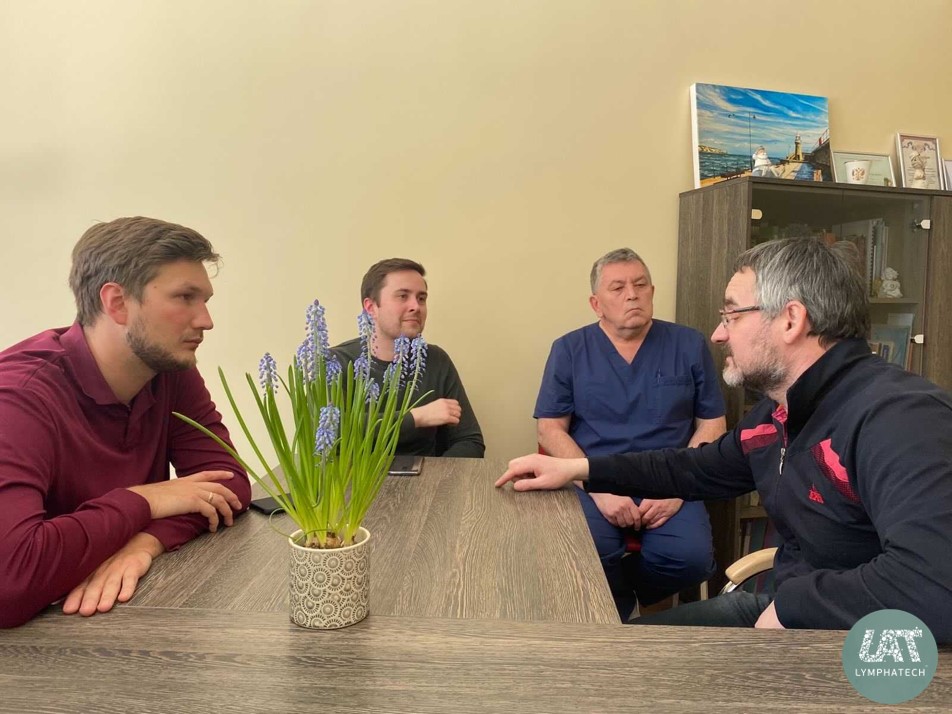 As usual, we did a full-scale check-up including multiple MRIs and CAT scans, EMG, extensive bloodwork, and immune system profiling. It took us less than a week. Our goal was to identify major contributing factors in his condition. Unsurprisingly, we found an aggressive immune system. His EMG results confirmed his primary diagnosis yet with some variations.

What is the key idea behind our approach? Our primary goals were to suppress the immune system and to enhance the lymphatic system so it could clean the tissues and paracellular space.  This would allow us to wake ‘sleeping’ motor neurons and intensively work on increasing muscle strength. All this was backed by intensive metabolic treatment and the careful observation of two doctors. 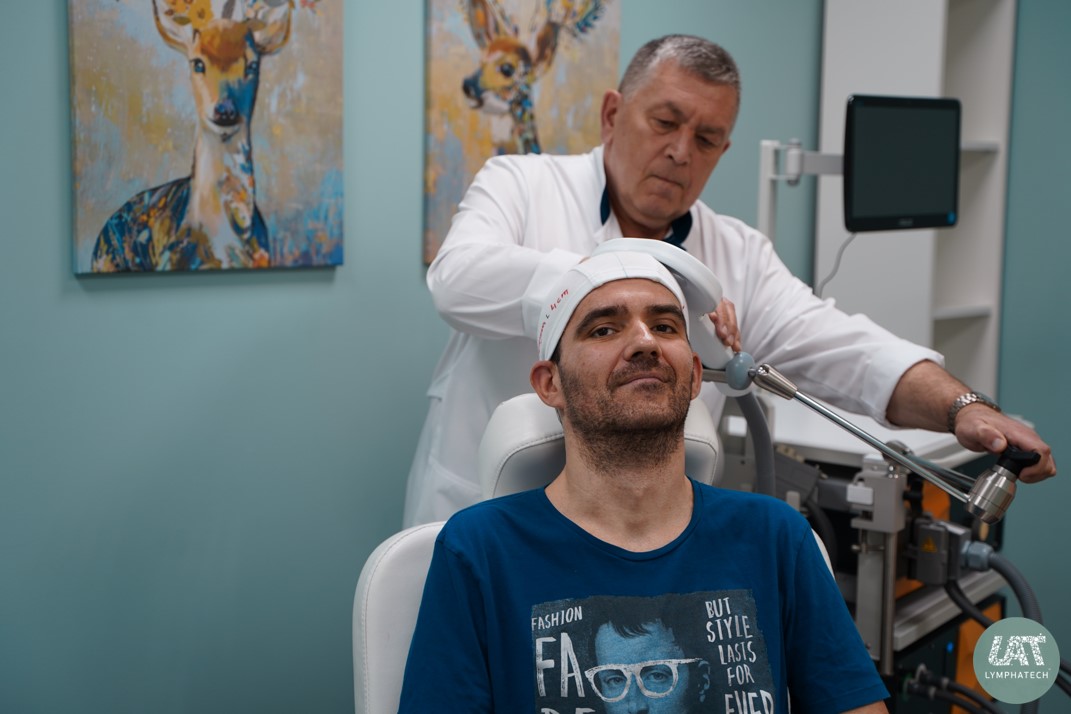 Patrik’s daily treatment routine included several intravenous infusions, lymphotropic injections for the immune system, up to eight protocols of transcranial magnetic stimulation, and two sessions of physiotherapy with a coach. 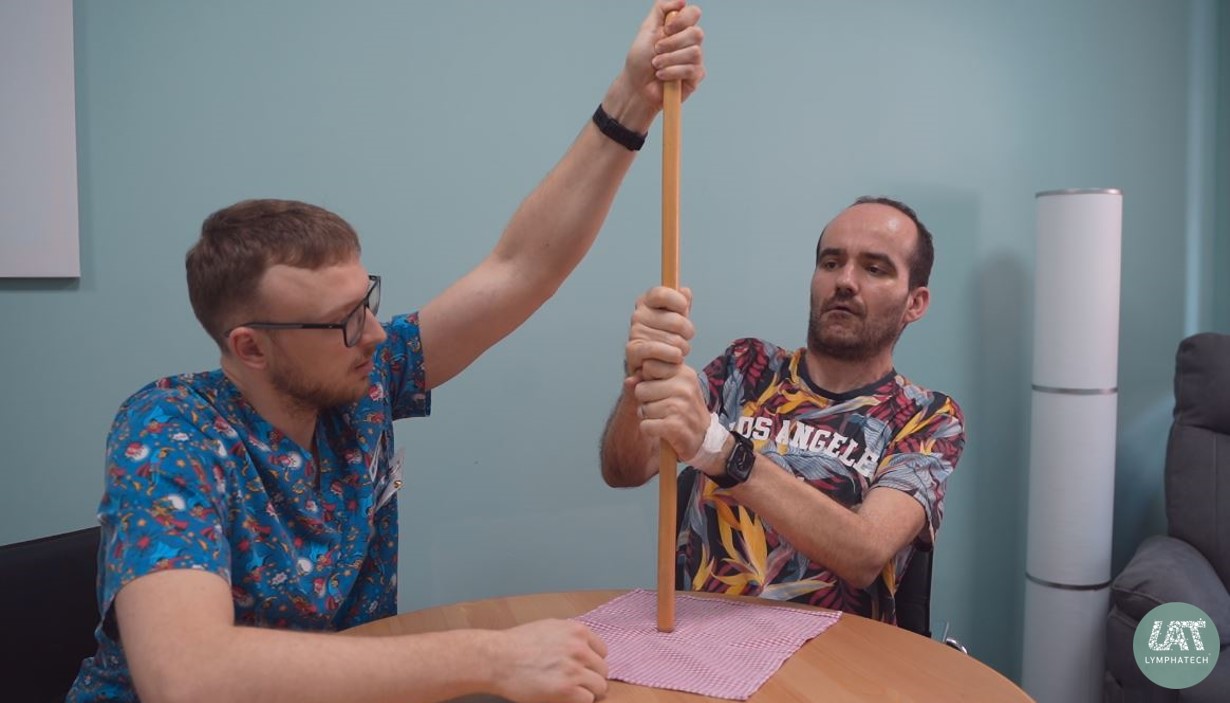 Along with extensive drug therapy, proper physiotherapy is a critical part of the treatment program

Patrik and his family spent six hours daily in the clinic with breaks for lunch over the next five weeks.  After five weeks Patrik had more blood work, an examination by a neurologist, and an EMG.

Patrik has become more energetic and is sweating less during the day. It was somewhat easier for him to walk. He was happy to see far fewer fasciculations and fibrillations in his limbs. The scale has not gone below 72 kg and Patrik has actually gained some weight. Remember he was losing 2 kg a month? He has been back home now for 3 weeks and has gained another 1.5 kg.

We repeated EMG studies at the end of the course and they proved that the responsiveness of motor neurons in his brain increased meaning there is hope that new axons will develop. The neural conduction in his legs also improved.

The doctor gave him +1-2 points on the ALSFRS-R score after 5 weeks of treatment. To understand what that means, think again of that clinical trial. For example, when they say that a patient on the tested drug lost just 1.2 points over a period of 3 months when a patient without the drug lost 1.8 points, then it means the drug is effective. Now, how should we rate Patrik’’s results when instead of losing points he gained some during 5 weeks?

Last but not least, the range of motion in the joints of his limbs improved.

When Patrik left Lymphatech, he was still not standing on his own or speaking clearly.  He needs more time and treatment. For future patients, we recommend coming for at least six weeks. 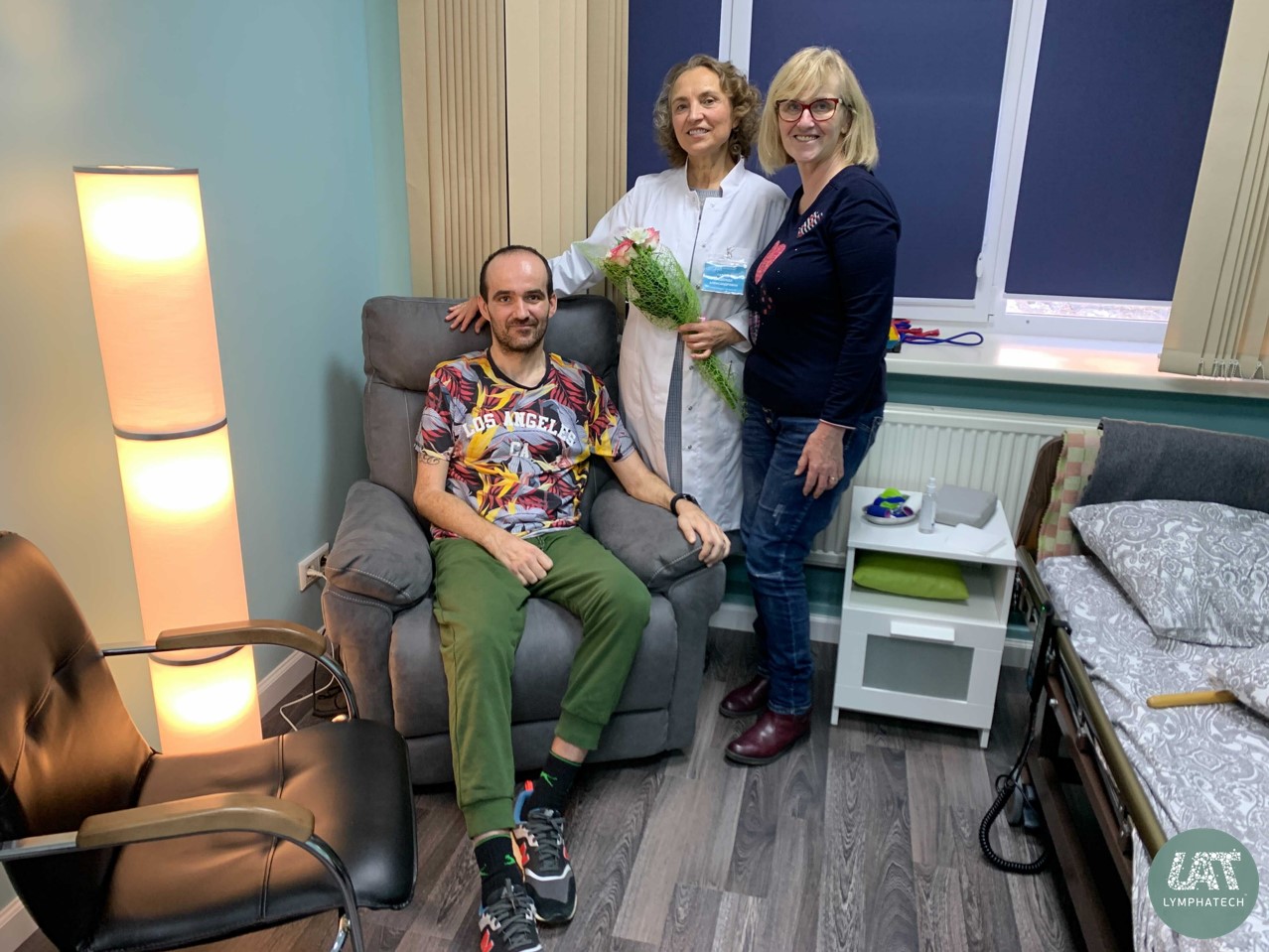 Dr.Nadia and Patrick with his mother after final consultation

We can view Patrik’s results skeptically, saying he was an isolated case, we need more data, we need more follow-up, and so on. This is fair if you are a researcher and planning to publish.  This would also be fair if we claimed our approach should now become a standard of practice globally.

Or, put yourself in Patrik’s shoes. Instead of losing strength and body mass daily, his deterioration not only stopped, but he actually got better.

What can I expect during my stay in Russia?

While 8 out of 10 patients admitted initial concern about a prolonged stay in Russia, all of them confess that their concerns were unfounded.

If you don’t speak Russian, it’s no problem. All communication with the Clinic will be in English. When you arrive you will have a personal assistant and interpreter at all medical activities.

The clinic will begin the visa process by requesting an official invitation from the authorities.  With this invitation, you can apply to the Russian consulate or a local Visa Centre for your visa.

A Welcome dinner and other out-of-clinic activities

Food and dining are highlights for many of our guests. They might have breakfast at the hotel or prepare it for themselves in their apartment. Lunch and dinner are available at various restaurants and can be ordered for delivery directly to the clinic.

Safety and transportation are not concerns, as the clinic offers courtesy transfers to and from the airport. The daily transportation to various medical tests, exams, and treatments is also arranged by the clinic.

Is Every Situation Unique?

Of course, every situation is unique.  But what would you choose? If you believe that the third option is for you,  follow this link and learn how to get started.

How can we help you?

Regardless of your health need we are ready to listen carefully and provide real solutions. Please fill out this short form and we will be in touch soon.

Susbcribe to The Lymphatech Link